• This is a single blog caption 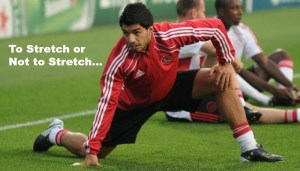 Did you stretch? This is a question that most athletes have heard at some point in their career, but one that has become increasingly scrutinized over the last decade. Historically, coaches and athletic trainers have suggested static stretching before practice and competition to limit injuries. However, as the result of research published over the last decade, many coaches and athletic trainers have shifted to favor a more dynamic style of stretching. An athlete twenty years ago may have jogged a few laps around the field and then stretched for 10-15 minutes before his or her event; whereas, today an athlete is more likely to complete a series of increasingly dynamic movements designed facilitate an increased competition state. According to literature and popular practice, which method is more effective? Or is a combination of both methods the best?

However, one cannot discount the psychological impact of superstitions, where a great performance is replicated by repeating everything, including the warm up! Consequently, if an athlete had a great performance after static stretching during their warmup, odds are the athlete will adhere to static stretching for life. While science and superstition can affect a future coach’s warmup protocol, more often than not coaches value other coaches’ insight above all else.